Your casino in Styria

The cultural capital of Graz shines with Mediterranean style in Austria

A casino short break to Austria and the birthplace of Arnold Schwarzenegger holds undreamed of surprises: Graz is not only the historic capital of the Styrian province in Austria, but also boasts modern architecture and the title of enjoyment capital of Austria. The bad news: one night is not enough to explore all of its merits.

Experience Graz in all its variety. Following its time as the European Capital of Culture the city of Graz by the Mur River delivers first class cultural offerings. Town Hall, Children’s Museum, Helmut-List Hall, Kunsthaus Graz and Mur Island were, and still are, the widely recognized highlights. During the evenings you can expect a stylish atmosphere and exciting entertainment at the Casino Graz.

The Mediterranean influence is not only felt in the mild climate experienced in Graz. The Styrian capital of Graz is also your ideal starting point for idyllic excursions and daytrips that highlight the culinary specialties of the region; for instance follow the South Styrian Wine street with all its famous wineries and typical Austrian wine pubs, bringing you regional Styrian tidbits accompanied by the fine South Styrian wines. A visit to the famous Grazer Clock Tower is an unmissable part of any short break to Graz in Austria. In any case, Graz will welcome you with a very warm smile.

The shopping metropolis that is Graz is also influenced by Mediterranean style. The art mile Sackstrasse boasts over 60 antiques shops, galleries, jewellers and art ateliers. A rather large shopping opportunity in Graz is also the open air Shopping Centre at the Grazer Hauptplatz with its historic listed buildings of different eras reflected in the architecture. In the Mariahilferstrasse between Kunsthaus and Lendplatz, a small but very creative scene has developed over the last couple of years. Here you will find more ateliers and designer shops – a real insider tip for exclusive gift ideas.

The famous Graz hospitality can be experienced at the Casinos Austria Partner hotel the Palais-Hotel Erzherzog Johann. Cuisine in the province of Styria in Austria is truly something special. Pumpkin seed oil, pumpkins and the Styrian wines are nowhere near everything that Graz has to offer when it comes to Styrian cuisine. Top Graz gastronomes rely on regional ingredients although the head chefs have travelled the globe. Experience the culinary highlights of Graz first hand and be spoilt during a Dinner & Casino Night. For instance, try the Restaurant “anna” at Palais-Hotel Erzherzog Johann, which is also of architectural noteworthiness.

In the evening exclusive entertainment awaits you at the Casino Graz, which is located in the historic congress building. The architectural blend of late classic elements and modern design is typical of the Styrian capital of Graz. From the elevated Casino Restaurant you have the best overall view of the casino.

One night is not enough to get to know the hotspots and highlights of Graz. Stay a little longer and enjoy the sunny Styrian style of Graz. The Casino Package Fortuna is ideal for a city break to Graz in Austria.

Or you can send us a no-obligation holiday enquiry! 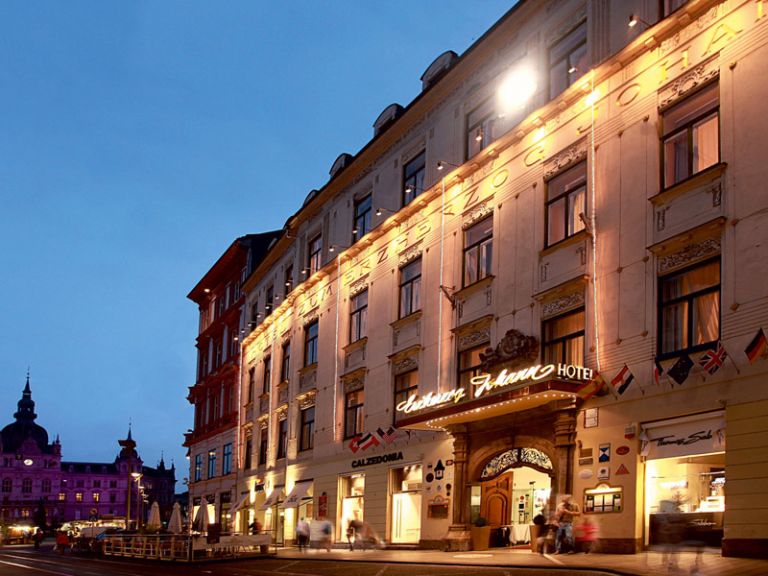 Our offers for you